As many of you might have realized by now, I like dressing up, and so, naturally, I love Halloween. This year though, I didn’t plan to go to the church-hosted YSA party in Gothenburgh (more than two hours away), as I’m so tired, and it would be a Friday to Sunday thing – way too long for me right now. But a day or two before the Saturday dress up dance, some of my friends told me they’d only go for the one evening, and then home again, and asked me if I’d care to come. Well, that changed things, and I had to try to find a costume in a hurry.

In the end, I brought my 14th century white linen shift, and dressed up as a ghost, with a nasty looking “vampire bite” (made from fake blood paste from the toy shop, eye-liner, blush, eye shadow, powder and water paint) on my throat. Everyone who asked was told that I had been on a date that went bad some 700 years earlier. 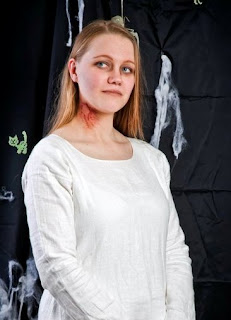 Picture by the talented Daniel Nilsson.

The neat thing about dressing up like a ghost when you’ve been exhausted for weeks is that it’s actually an advantage if you look gaunt and tired... 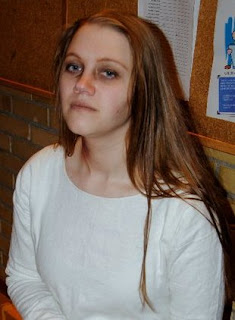 I guess it was my being in character most of the time (if you can call it that when you’re actually just lacking the energy to keep a smile on your face and a look of interest in your eyes for more than a few minutes at a time...) that nominated me to the prize for scariest costume. I even won (first time in my life I've ever won anything, I think), though I think it was really a tie between me and my friend J. W., the crazy professor.

Mind you – it’s a strange thing, that when I’ve spent weeks on a costume, making sure every detail is right, hardly anyone has noticed it. When I improvise with a days notice, on the other hand, I win. It’s an odd world... But as I plan to make a really nice costume for next year, this will most likely be the only prize I will ever win, but that's all right. I make them for my own pleasure anyway, and that's the important thing :D